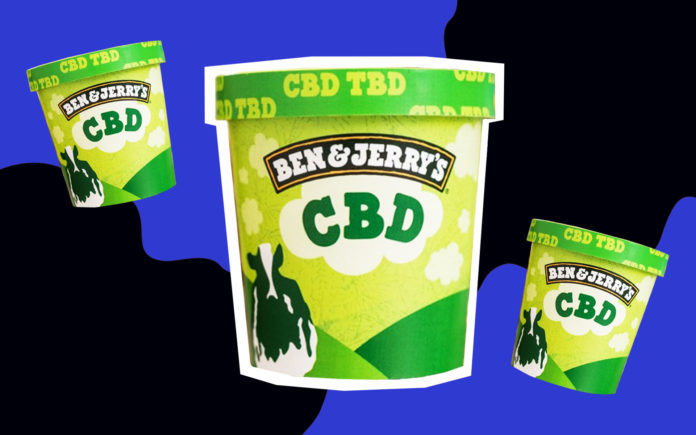 Ben & Jerry’s, the Vermont-based ice cream maker known for such cannabis-inspired concoctions as Half Baked and Dave Matthews Band Magic Brownies, announced Thursday that it’s hopping on the CBD bandwagon—or wants to, anyway.

“You probably already know that we’re fans of all things groovy,” the company said in a press release announcing its plans to produce CBD-infused ice cream. “So it’s no surprise that we can’t wait to get into the latest food trend: cannabidiol, or CBD.”

CBD, a non-intoxicating cannabinoid that has shown promise in treating serious health conditions such as epilepsy and autism, is having a Cinderella moment. Long overshadowed by its psychoactive counterpart, THC, cannabidiol has exploded as a sort of superfood in recent years. It’s now showing up in all sorts of everyday consumer products, from seltzer to toothpicks.

“We are committed to bringing CBD-infused ice cream to your freezer.”

“We’re doing this for our fans,” Ben & Jerry’s CEO Matthew McCarthy said in a statement. “We aspire to love our fans more than they love us and we want to give them what they’re looking for in a fun, Ben & Jerry’s way.”

Don’t head for the freezer aisle just yet. Despite the recent federal legalization of hemp, CBD itself is still a thorny legal subject. The US Food and Drug Administration (FDA) currently prohibits it as an additive to food or beverages.

So unlike Carl’s Jr. and its CBD-infused burgers—sold for one day only in Colorado this year—Ben & Jerry’s isn’t rushing its CBD treat to market.

Instead, it’s waiting: “We are committed to bringing CBD-infused ice cream to your freezer,” the company says, “as soon as it’s legalized at the federal level.”

“Just chasing a trend isn’t quite enough for us,” the release continues. The FDA “set a public hearing on the legalization of CBD-infused foods and beverages for May 31st, and we’ve submitted a comment to them in support of legalization.”

The announcement also includes a link for consumers to make their own voices heard, by filing a comment with the FDA as the agency weighs how to handle CBD. It’s in keeping with the company’s past cannabis activism, such as its 4/20 call for criminal justice reform.

If you think this is a gimmick to piggyback on CBD’s popularity to sell more ice cream, well, you might be right. But for now, Ben & Jerry’s theoretical CBD-infused ice cream is also a palatable way to encourage participation in cannabis reform.