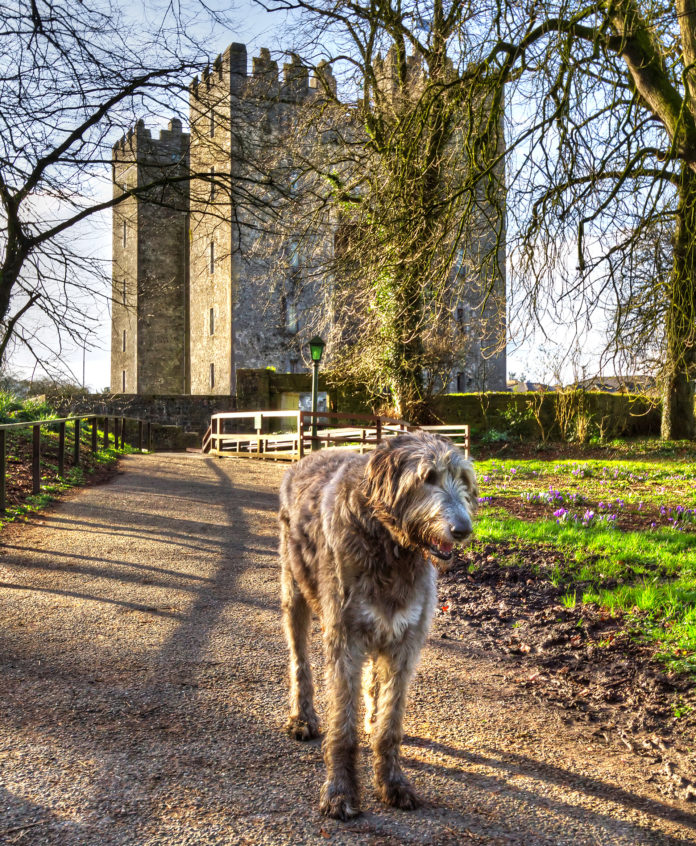 Ferocius Warrior With the soul of a poet

The motto of the Irish Wolfhound is “Gentle when stroked, fierce when provoked”, which appears on the coat of arms of early Irish kings along with a shamrock and a harp. It’s a lovely poetic line but it doesn’t tell us how or when the Irish Wolfhound became a part of Ireland’s history and heritage.

Through ancient woodcuts and writings, historians have determined that the breed existed as early as 273BC – and probably much earlier. For example, when the Celts sacked Delphi in 600 BC, one survivor was impressed enough to leave an account of the huge dogs who fought alongside their masters.

The ancient Irish word for hound is “cu”. In those days, it was common for warriors and even kings to place the preface “Cu” in front of their names, the implication being that they were as worthy of respect as a cu. A well-known Irish epic is the legend of CuChulainn (koo-hoo-lin), perhaps the most famous of the old Irish heroes.

As the story goes, he came to the castle of a King, but his entrance was barred by a huge hound. He battled with the dog for a day and a night before he was finally able to kill it. Then, in typically Irish fashion, he was filled with remorse that he had been forced to slay so fine and noble a beast. To make it up to the King, he resolved to act as the King’s hound for a year and a day, and so he came to be known as CuChulainn, “Hound of Cullain”.

Around 400 A.D., Saint Patrick at age sixteen was abducted by Irish marauders. He was enslaved and kept as a shepherd for six years, his sole companion being a Irish Wolfhound. In response to a dream, he made his way some two hundred miles to the coast, with his faithful companion, where he found the ship that the dream foretold would return him to his own land.

The ship was from Gaul, and the master had put into Irish waters in order to get a cargo of Irish Wolfhounds, which were bringing fabulous prices on European markets. Not surprisingly, as a penniless runaway slave, Patrick was received rather unsympathetically when he tried to gain passage. However, just as he was leaving, he was suddenly called back. It seems that, to maximize his profit, the captain had opted for stealing, rather than purchasing, his cargo of dogs. Over one hundred great Irish Wolfhounds now packed the holds and filled the deck of the ship. Taken from their masters and their familiar surroundings, the giant dogs were frantic and furious, ready to savage anyone who came near. Some of the sailors had noticed that during Patrick’s brief visit to the ship, he had spoken with some of the dogs and seemed to have a calming effect on them. Therefore, in exchange for his services – which would involve feeding, cleaning up after, and otherwise caring for the dogs – Patrick received passage to the continent.

Another story involving the Irish Wolfhound took place in the 13th century. LLewelyn, Prince of North Wales, had a palace in Beddgelert. One day he went hunting without Gelert, his faithful hound, who was unaccountably absent. On Llewelyn’s return, the hound was stained and smeared with blood; joyfully, he sprang to meet his master. Alarmed, the Prince, hastened to check on his infant son. The cradle was empty and the bedclothes and floor were splattered with blood. The frantic father plunged his sword into the hound’s side, believing the hound had killed his beloved son. The Wolfhound’s dying call was answered by the child’s cry. Llewelyn searched and discovered his son, unharmed. But nearby the child, lay the bodies of several wolves, slain by Gelert. It’s said that the the Prince was so consumed by remorse and shame, he never smiled again.

Hunting and fighting filled the life of the early Irish, and master and hound alike excelled in both hunting and on the field of battle. So it was not unusual that Irish Wolfhounds were so highly prized for their hunting prowess. They were so popular that many of them were exported and by the 17th century, the breed was almost extinct. In fact, a directive was issued in 1652, banning the transportation, i.e. exportation, of Irish Wolfhounds from Ireland.

Today, of all the animals cherished in Ireland, dogs appear to be the most revered and of these, only the Irish Wolfhound appears as a symbol, at one time or another, on everything from jars of Tulamore Dew whiskey to every piece of Belleek Pottery. The Irish sixpence once featured the likeness of the international show champion – Finbarr.  And, in 1983, Ireland commemorated her enduring love and homage for the breed she claims as her own, by issuing a postage stamp which featured the Irish Wolfhound.

Perhaps one of the most touching uses of the  Irish Wolfhound as an Irish symbol in the United States is the statue in the Gettysburg National Battlefield in Pennsylvania. Sculpted by W. R. O’Donovan in memory of the fallen soldiers of the 63rd, 69th and 88th New York infantry – The Irish Brigade – it features an Irish Wolfhound in mournful respect, lying at the base of a Celtic cross. The monument is located midway between the Wheatfield and the Rose farm.

So, what’s this Florigrown case about anyway?