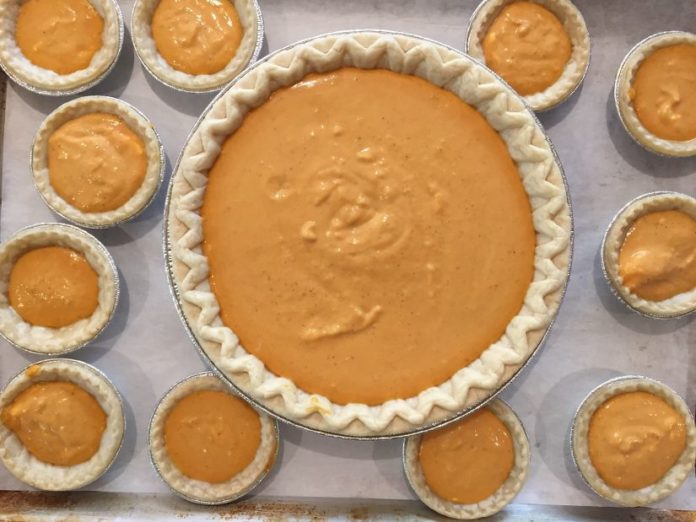 It’s Thanksgiving season and everyone is reserving their turkey birds and preparing for the annual feast. Usually, everyone brings a dish to dinner which makes the feast even greater. But, I think, the one thing everyone takes for granted is that the traditional dessert of Pumpkin Pie will just appear. Who actually makes it and how in the world is it made? Every year, at my family table, my grandfather bakes the delicious pies we share at the end of the meal. He is the only one who makes them because he was once a baker as his profession (and still is though retired). But, one year, he wasn’t feeling the best health-wise and didn’t bake the pies. Everyone at the table acted as if everything was great and they were all alright snaking on cookies and chocolate, but I was shocked! NO PUMPKIN PIE? Well, I guess if I want to have it, I’ll have to learn to make it.

Now, think about it. If you can unlock the secret of making pumpkin pie, you also obtain the power to dictate the ingredients and alter it as you please. For me, this was a game changer because sometimes pumpkin pie is watery, sometimes it’s too sugary or doesn’t have enough, and most of the time the crust is a failure. And the crust is the most important part! So, I stole the crust recipe from my grandfather and instead of keeping it a secret and passing it on to the next generations to come, I am passing it on to the LIWTS community exclusively.

It is a hell of a project, baking a pumpkin pie, but I have found a few hacks that make it much more bearable. And since this recipe uses cannabis infused coconut oil, you may not want to bring this to the family dinner – or maybe you do. I often bring this gem to my Friendsgiving celebrations as a merry way to honor our meal and friendships and indulge in some pie!

If you would like to feel a little bit more professional in concocting this recipe, solve your cannabis in cream because the best pumpkin pie is made with condensed milk or heavy cream. Also known as cannacream. Unfortunately, I am lactose-intolerant and heavy cream does not work for me. In this recipe, 1 cup of yogurt can be substituted for the cream or ½ cup of alternative milk with the addition of some nut butter. Keep in mind that yogurt, nut butter and most alternative milk (because of the fat content) are not good cannabis solving products so I added cannabis-infused coconut oil.

First things first, you have to acquire the ingredients and also have your cannabis-infused coconut oil already made. Make sure to have a pie pan too, because this is essential. I bring this up because so often I choose to bake a pie and the kitchen I am working in will be lacking a pie pan! You should also have a flat surface to work on, preferably wooden like a cutting board, and a rolling pin to roll out the pie dough (but a wine bottle can also easily do the trick). And a food processor would be ideal.

Now, get down to business. Roll up your sleeves, smoke a joint and start baking!

NFL and Players’ Union to Study Potential Use of Marijuana for...