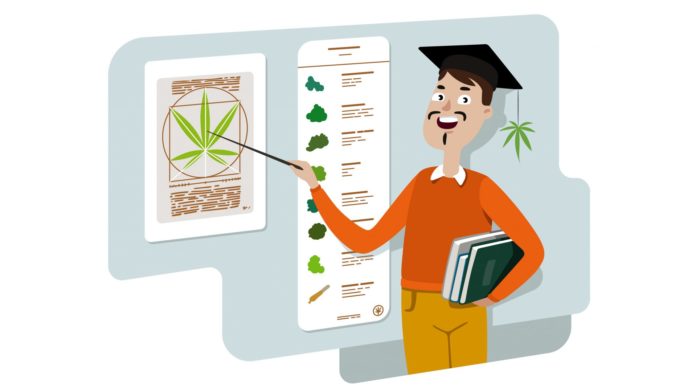 From weed slang to scientific terms, from different ways of consuming cannabis to popular strains of weed—here’s a weed dictionary that’ll get you up to speed and sounding like you know what you’re talking about in no time.

Usually made of: glass, ceramic, or plastic. Often seen in: Hollywood comedies within the last 10 years. Like a hookah, bongs filter smoke through water and cool it down a bit before you inhale it. (That’s why it’s easier on your lungs than a joint.) There are pretty basic-looking bongs with just a stem and a bowl—and then there are super intricate ones with different colours, shapes, and more depending on your aesthetic preferences—and how “clean” you’d like your smoke.

The part of a bong or pipe where you put your cannabis flower. (Also a unit of measurement: about the size of a few nuggets.)

Aka. the “flower” of the cannabis plant. This is what you grind up to smoke. Good-quality buds are crucial because they contain the all-important cannabinoids (THC, CBD, and so on).

A type of cannabinoid found in cannabis plants. Some strains of cannabis are high in CBD and low in THC, while others are more balanced or contain relatively more THC. Compared with another well-known molecule named THC, CBD is preferred for its medicinal benefits—without the psychoactive “buzz.” You can find CBD in many different forms including tinctures, capsules, and oils.

Chemical compounds that act on the brain’s cannabinoid receptors. Found in cannabis plants, the two most well-known cannabinoids are THC and CBD.

One of any number of different cannabis products refined from flower into a purer form. Concentrates can be shatter, wax, hash, and so on. They can be extremely potent and are usually more popular with advanced cannabis users.

A small amount of concentrate. When dabbing, you’re basically applying heat to vaporize the concentrate, then inhaling it. Dabs are not for beginners—while buds usually max out around 25% THC, dabs can contain as much as 80% THC.

Cannabis-infused foods (sometimes used to refer to drinks, but not common). Can range from brownies and gummies to lollipops and jerky. Effects are less predictable because the human body metabolizes food and cannabis differently from person to person, and highs usually last longer.

A common measurement of weed during purchases: one-eighth ounce (or 3.5 grams~)

The sticky, fuzzy parts of a cannabis plant. This is what we use to consume weed in different forms.

A mix of two cannabis strains. Hybrids are usually bred with specific traits in mind—some people might prefer a blend of indica and sativa characteristics depending on how mellowed out or clear-headed they want to feel.

A rolled cigarette that contains cannabis. Traditionally popular, but vapes and other potable ways of smoking weed are slowly catching up. There are also different names for different types of joints including fatties, spliffs, and doobies.

Aka. hash oil, aka. shatter, aka. wax (they’re just different consistencies). Looks like translucent liquid gold. One of the cleanest types of concentrates, with no chemical solvents. Vape it, eat it, dab it.

The end of a joint. The part that’s so stubby and sad, you need to just let it go—or risk singeing your fingers. But fear not, you can use a roach clip to save your precious cannabis—or combine it with other roaches to create a super joint… or you could even add it to a bowl. Why waste a good thing?

Along with hash oil, shatter is one of the most potent forms of cannabis out there. It’s a concentrate without chemical solvents as they’ve been extracted, which makes you’re getting something way purer than, say, a joint. The definition of shatter is kind of like the dab, as it can be both a noun and a verb. As the name implies, you can shatter shatter easily to melt and then smoke (dabbing!), or you can just add it to a bowl.

Strains are different pure or hybrid varieties of the cannabis plant. So far, there are upwards of 800 strains of cannabis, each bred to feature certain traits, with many creative names (courtesy of growers). Each strain has unique colours, smells, and effects. As of 2018, the regulations between naming and maintaining a database of strains are not as tight as they can be—improvements need to be made before you can be sure that you’re actually buying the strain that you think you’re getting.

Chemical compounds found in the essential oils of cannabis plants. Terpenes are what give the flowers their unique flavours and scents. They’re sensitive to high temperatures, so cannabis is best kept in cool, dark places.

An alcoholic extract of cannabis, though it can also be made from glycerin, which is sweeter than alcohol. Either way, flavoured tinctures can mask the alcoholic taste. Typically dropped under the tongue with an eyedropper for faster absorption.

Aka. “hit,” “puff”—the act of inhaling cannabis smoke. Can be used as a noun or verb, and in reference to joints, bongs, and other smoking apparatus

A cream, lotion, or balm made from cannabis. Applied to and absorbed through the skin, usually targeting physical conditions like skin irritation and pain.

A portable, handheld version of a vaporizer. Used with cartridges that you can prefill with different types of cannabis—or just fill the chamber with flower or concentrate. Often touted for their lack of smell, but if you’ve ever been around someone who’s vaping, you’ll know that the vapour still carries a scent.

Concentrated form of cannabis. Like shatter, it’s super potent due to its high THC levels. The consistency varies from a semi-solid oil (aka. crumble) to a more gooey oil (aka. budder).

Terpenes; What’s in your medicine?