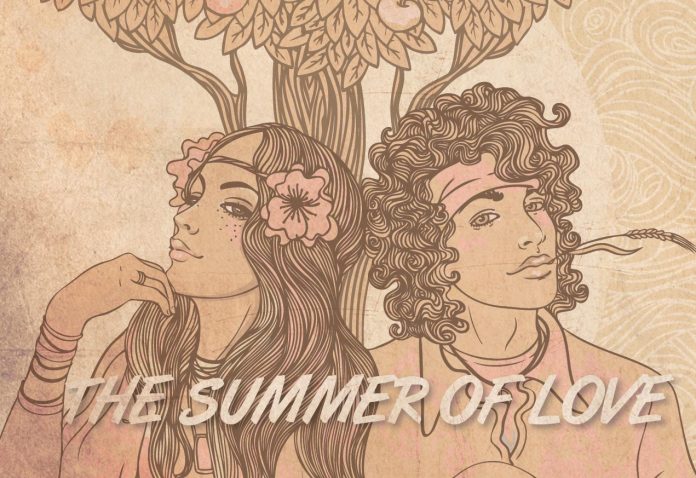 The Summer of Love refers to the summer of 1967, when an unprecedented gathering of as many as 100,000 young people converged on the Haight-Ashbury neighborhood of San Francisco, creating a phenomenon of cultural and political rebellion. While hippies also gathered in New York, Los Angeles, Atlanta, Chicago, and across Europe, San Francisco was the epicenter of the hippie revolution, a melting pot of music, marijuana, sexual freedom, creative expression, and politics. The Summer of Love became a defining moment of the 1960s, as the hippie counterculture movement came into public awareness

During the Summer of Love, people from around the world flocked to San Francisco’s Haight-Ashbury district, Berkeley and other San Francisco Bay Area cities to join in a popularized version of the hippie experience. Free food, free drugs and free love were available in Golden Gate Park, a Free Clinic (whose work continues today) was established for medical treatment, and a Free Store gave away basic necessities to anyone who needed them.

The Summer of Love in 1967 also presented a recognition of great music during that summer. Although I don’t consider myself a hippie, I did have friends who considered themselves a hippy.  This period of time although many from the 60s generation did not recognize or support it, needs to be recognized here on this site because it was a part of the 60s generation history. The ever-increasing numbers of youth making a pilgrimage to the Haight-Ashbury district alarmed the San Francisco authorities, whose public stance was that they would keep the hippies away. However the police did little to help, leaving the organization of the hordes of newcomers to the overwhelmed residents. College and high-school students began streaming into the Haight during the spring break of 1967. City government leaders, determined to stop the influx of young people once schools let out for summer, unwittingly brought additional attention to the scene. An ongoing series of articles in local papers alerted national media to the hippies’ growing momentum. That spring, Haight community leaders responded by forming the Council of the Summer of Love, giving the word-of-mouth event an official-sounding name.

The mainstream media’s coverage of hippie life in the Haight-Ashbury drew the attention of youth from all over America. Hunter S. Thompson labeled the district “Hashbury” in the New York Times Magazine, and the activities in the area were reported almost daily.

The movement was also fed by the counterculture’s own media, particularly The San Francisco Oracle, whose pass-around readership topped a half-million at its peak that year.

The media’s fascination with the “counterculture” continued with the Monterey Pop Festival in June 1967, where approximately 30,000 people gathered for the first day of the music festival, with the number swelling to 60,000 on the final day. The song “San Francisco (Be Sure to Wear Flowers in Your Hair)” written by John Phillips of The Mamas and the Papas and sung by Scott McKenzie was initially designed to promote the Monterey Pop Festival. “San Francisco” became an instant hit, In fact the song became a Summer of Love anthem, reaching number four in the US charts but number one in Britain, and quickly transcended its original purpose by popularizing an idealized image of San Francisco. In addition, media coverage of the Monterey Pop Festival facilitated the Summer of Love, since large numbers of fledging hippies headed to San Francisco to hear their favorite bands, among them Jefferson Airplane, The Jimi Hendrix Experience, Otis Redding, The Byrds, the Grateful Dead, The Who, and Big Brother and the Holding Company with Janis Joplin.

On October 6, 1967, those remaining in the Haight staged a mock funeral, “The Death of the Hippie” ceremony, to signal the end of the played-out scene.

Realizing that peace and love couldn’t sustain them forever, most of the hippies eventually had to go back to university or get a job, although some found ways to continue their alternative Hippy lifestyles at home and some embraced foreign travel as a means to find oneself and communicate with others, and the first backpackers set off on what became known as the ‘hippy trail’, through Europe and the Middle East to India. They hitchhiked, travelled by public transport or used revamped double-decker buses and camper vans, always living as cheaply as possible.

For most, though, the utopian dream had come to an end.