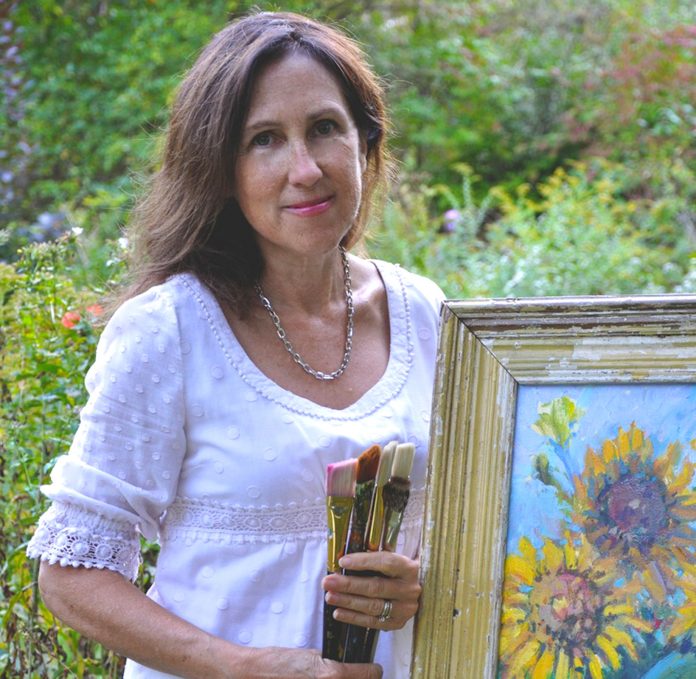 To muse, or not to muse? That is the question. The visual aesthetics of art have led most artist to draw inspiration from what they encounter visually in everyday life. Things like the human body, geometric objects and nature have played the role of muse for artist over centuries. The relationship between artist and muse has long been one of infatuation, but through ART420’s Cannabis Inspired Art collection, what was once harmless flirting has turned into full intoxication. Such an intoxication is evident in the impressionistic masterpieces created by artist Catherine M. Elliot which embody the euphoric appeal of the cannabis plant.

For the last 30 years Catherine has perfected her use of oil on canvas through well planned composition and deliberate color-pallet integration. She has created works depicting a range of subjects including Neckers Island, the home of Sir Richard Branson, owner and founder of Virgin Group which includes the well know Virgin Airlines. Her works have sold to collectors around the country and she is the recipient of numerous art awards and recognitions. The famous singer Willie Nelson has even signed one of her works created in his likeness.

With a Yale botanist for a grandfather Catherine was drawn to nature and plants from a young age. Admittedly however, she had not considered the ancient medicinal plant as a subject for her work until her husband began managing a medical marijuana facility in Connecticut, where she lives. Everyday he would bring home photos of the beautiful buds that he came across while at work that day, until finally one day she said to herself “Why not create a couple of painting of this beautiful plant?”

Just like consuming cannabis the onset of intoxication doesn’t take long to set in. Before she knew it there was an entire series of works created and calls from local collectors and dispensaries were flooding in. Rich Wagner award-winning framer and art collector says, ‘What Water Lilies are to Monet, are what Cannabis buds are to artist CM Elliott”.  As an artist, she is very inspired to create beautiful long lasting heirloom paintings for both public and private enjoyment. She has plans to work with stores, dispensaries, growers and other aspects of the cannabis industry to help set their products off for visual and emotional appeal.

It is the naturally appealing aesthetics of the cannabis flower which led Catherine to infatuation, but it is the energy which the plant gives off in its vibrant colors which induced an intoxication with her new muse. Catherine Elliot’s works have encapsulate the calming and healing properties of the cannabis plant, which some might say, can also be transmitted through a single glance.

Art collectors and buyers interested in purchasing Catherine’s works can inquire at info@artfourtwenty.com/ 407-490-4207.