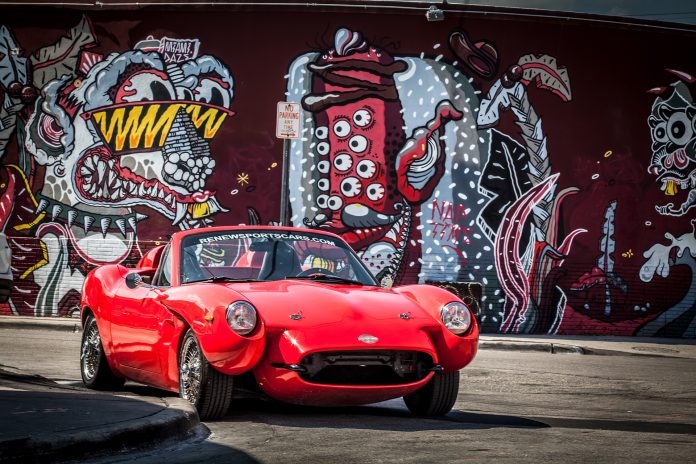 Forget autonomous driving vehicles. Going Carbon Negative is what’s really hot according to Bruce Michael Dietzen who claims that cars of the future will be made from CO2 extracted from the atmosphere. If that sounds radical it shouldn’t. Henry Ford pioneered the idea 76 years ago.

In 1941 Ford unveiled a car made from plants and powered by plants (you know, those green things that inhale CO2 and exhale oxygen). And while no one actually cared about the “Lifetime Carbon Footprint” of cars back then, it’s footprint was probably around 3 tonnes, which is 6 to 10 tonnes less that today’s EV’s according to Dietzen who is following in Ford’s footsteps.

Affectionately referred to as “The Cannabis Car,” Dietzen’s Renew Sports Car is a reincarnation of a first generation Miata, with an incredibly durable body made of carbon negative Cannabis Hemp. How durable you ask?

Ford used to beat his car with a rubber tipped sledge hammer, but Dietzen prefers to use a closed fist. Both agreed that cars made of plants are ten times more dent resistant than steel, while Dietzen has also discovered that body panels made of woven hemp are lighter than fiberglass panels. And of course, they’re carbon negative since anytime you make a durable good from plants you are sequestering CO2 out of the atmosphere.

The body is just the first step toward Dietzen’s mission to make Carbon Negative Vehicles or “CNVs” by 2025. And the formula is an incredibly simple one. Just make more than half the weight of a vehicle from carbon negative materials and that offsets those components of a vehicle (like the motor and the glass) which have to be made from carbon positive materials.

Dietzen toured the country last fewyear, running his car on a second generation biofuel made from agricultural residue, just like Henry Ford’s car did, proving once again that cars can be nearly carbon neutral if they are made and fueled by plants. But now he’s on to something bigger. Much bigger.

Having rediscovered that an automobile can be nearly carbon neutral when it rolls off a production line, all that’s needed is one more big carbon negative boost to break the carbon barrier and become carbon negative and Dietzen thinks he’s found it.

Currently under design at Renew is an all electric version of the car, with up to 640hp, and one more critical component: carbon negative batteries. While not on the market yet, the technology exists to produce the anodes and the electrodes of these batteries from carbon derived from plant material via pyrolysis. This “Dual Carbon” battery technology, if encased in bioplastic, and embraces a carbon neutral electrolyte like sodium instead of lithium, holds the potential of being at least 75% carbon negative. And when you consider the fact that roughly a third of the weight of an EV is in it’s batteries, well that changes everything. The EV of the future, with a body, chassis, upholstery, carpeting, bioplastic components and dual carbon batteries will usher in the era of CNV’s. And our vehicles will actually help reduce green house gases instead of making more of them.

There is one caveat however. If the CNV’s of the future are charged via a coal powered grid, all bets about being carbon negative go out the window. But that shouldn’t be a problem as more and more electricity these days is being generated by renewable resources.

Like autonomous driving vehicle technology, CNV technology will roll out in phases. You cannot buy a truly autonomous vehicle today and you cannot buy a fully carbon negative vehicle yet either. But you can buy into the “Going Carbon Negative” trend by having Renew build you one of these sexy, custom vehicles.

Typically licensed and insured as modified Miatas, Renew’s are not available in kit form. Hemp is not as easy to work with as fiberglass or carbon fiber, and 800 hours of labor go into making one. Your Renew can retain the fuel efficient four cylinder 100 to 130hp internal combustion engine housed in the required donor Miata, or add a turbo charger, or be upgraded to a 525hp V8 if that’s the sort of thing your into. Dietzen will likely steer you toward  a 100% electric drive conversion however.  All of these Miata power train conversions and additional after market options have been available from third parties for years. And they all are compatible with a Renew.

Hemp’s Road Map for the Future