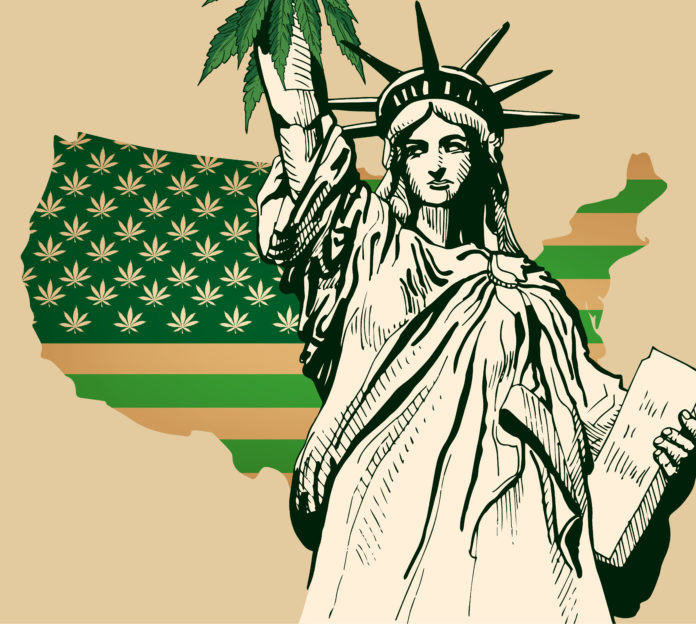 On June 25, 2018, the U.S. Food and Drug Administration (FDA) announced its first-ever approval of a marijuana-derived pharmaceutical drug. Epidiolex (cannabidiol or CBD) was approved for the treatment of two rare, pediatric seizure disorders, Lennox-Gastaut syndrome and Dravet syndrome.1 On September 27, 2018, the Drug Enforcement Administration (DEA) announced its scheduling of Epidiolex – and future drug products containing CBD derived from marijuana with no more than 0.1 percent tetrahydrocannabinols – in Schedule V of the Controlled Substances Act (CSA).2  These events represent historical milestones in the journey of Cannabis from a source of textiles and medicines in the early nineteenth century to an illicit drug and now an FDA-approved drug.

Cannabidiol (CBD) is one of more than a hundred cannabinoids found in Cannabis sativa L. (Cannabis spp. or Cannabis), a plant more well-known colloquially as “marijuana” or hemp [Please see Author’s Note below].3  CBD was first isolated in 1940 and characterized structurally in 1963.4,5 With projected retail sales of CBD products -hemp, marijuana and pharmaceutical – as high as $1.9 billion by 2020, CBD is poised to become the darling of the medical Cannabis movement.6

Despite its rapidly growing popularity and use, the regulatory status of CBD in the United States remains convoluted, even after the approval and scheduling of Epidiolex. The source of CBD is critically important in determining its legal status. The most common source, botanically speaking, is the plant Cannabis sativa L. (Cannabis), which encompasses both marijuana and hemp. There are various schema for differentiating marijuana from hemp (e.g. Genotype, phenotype, Drug-type Cannabis v. fiber-type Cannabis, etc.), but from a regulatory standpoint, the difference between marijuana and hemp is based on chemical composition, specifically as it relates to the concentration of delta-9 Tetrahydrocannabinol (THC), the primary intoxicating compound found in Cannabis. Hemp is legally defined as a cultivar of Cannabis sativa with low concentrations of THC. Although limitations on THC concentrations for hemp differ internationally, THC concentrations cannot exceed three tenths of one percent (0.3%) in the United States. Hemp-derived and marijuana-derived CBD each have their own unique regulatory status and consequent legal implications.

Despite the scheduling of Epidiolex, CBD from marijuana is still deemed a Schedule I controlled substance by the DEA pursuant to the 1970 Controlled Substances Act. As such, CBD from marijuana is deemed to have no accepted medical use, a lack of accepted safety for use under medical supervision, and a high potential for abuse.1,7-11 While the scheduling of Epidiolex represents the first time that the DEA has acknowledged that marijuana has a “currently accepted medical use”, it did not change the regulatory status of CBD itself.

On May, 22, 2018, the DEA issued an internal directive which stated, “Products and materials that are made from the Cannabis plant and which fall outside the CSA definition of marijuana (such as sterilized seeds, oil or cake made from the seeds, and mature stalks) are not controlled under the CSA”.12 Although these statements clarified that CBD derived from a source other than marijuana was not a controlled substance, they did not specifically state that CBD from industrial hemp was lawful. Furthermore, these parts of the plant are not viable sources of CBD. As a result, confusion remains.

CBD can also be extracted from some hemp cultivars. Historically, hemp has been bred as an industrial crop in order to produce fabrics, rope, and other textiles from its long stalks.13 Despite not being explicitly defined or mentioned in the CSA, has been considered a controlled substance by the DEA since the passage of the CSA in 1970.

On December 20, 2018, The Hemp Farming Act of 2018, S. 2667 (2018 Hemp Bill) became law and formally and definitively removed hemp from the list of controlled substances. The 2018 Hemp Bill redefines hemp as all parts of the Cannabis Sativa plant that do not exceed 0.3% delta-9 THC by dry weight, including “derivatives,” “extracts” and “cannabinoids.”14 Importantly, the 2018 Hemp Bill explicitly removes popular hemp products, including hemp-derived CBD, from the purview of the CSA.

Prior to the passage of the 2018 Hemp Bill, domestically cultivated hemp was only federally lawful when cultivated under a state-sanctioned pilot program. In 2017, a total of 23,343 acres of hemp were cultivated across 19 states. As of this writing, 41 states have passed legislation to allow them to take advantage of hemp pilot programs under the 2014 Farm Bill.15 Today, only a minority of the hemp-derived CBD products available in the US are derived from domestically cultivated hemp. This will change as the 2018 Hemp Bill fosters greater investment in this area.

In addition to industrial hemp, CBD may also be lawful if it is derived from “non-psychoactive hemp” imported into the US. Non-psychoactive hemp is the term used by the Ninth Circuit Court of Appeals in a pair of companion cases filed against the DEA by a national trade organization, the Hemp Industries Association (HIA), regarding a DEA rule, which would have made it illegal to import any hemp products that contained any THC, including trace amounts.16,17 In a February 6, 2004 ruling, the Court found that the DEA had exceeded its authority in enacting the rule and struck it down as void and unenforceable.18

In its ruling – which did not specifically mention CBD – the Court used the term “non-psychoactive hemp”, and in a footnote stated, “The non-psychoactive hemp used in Appellants’ products is derived from industrial hemp plants grown in Canada and in Europe, the flowers of which contain only a trace amount of the THC contained in marijuana varieties grown for psychoactive use” (emphasis added). Confusion remains as to whether the Court, in effect, legalized the whole hemp plant for importation, including the “flowering tops”, so long as it contains no more than trace amounts of THC, or whether it simply reiterated the mature stalks exception in a different context. That distinction has never been addressed. Cases addressing hemp, which both preceded and succeeded this ruling, do not resolve the issue.9

To complicate matters further, prior to the approval of Epidiolex, the FDA explicitly stated that “CBD products are excluded from the dietary supplement definition” because of CBD’s status as an Investigational New Drug (IND) under the Food, Drug and Cosmetic Act (FD&C Act).20CBD is no longer an Investigational New Drug (IND). It is an approved one. As a result, CBD cannot be included in a dietary supplement.

This preclusion is not entirely novel. In a somewhat similar case, Biostratum, a pharmaceutical company, requested the FDA take action against manufacturers of pyridoxamine-containing dietary supplements because Biostratum had submitted an IND application for pyridoxamine dihydrochloride.21 It took the FDA three and a half years to formally conclude that these products were in violation of its regulations. Products containing pyridoxamine and being sold as dietary supplements are not currently permitted.

There is another precedent which informs predictions of how the FDA might alter its enforcement approach going forward. In April 1997, Pharmanex, a dietary supplement manufacturer was advised by the FDA that its mevinolin-containing dietary supplement, named Cholestin, was a drug, not a dietary supplement. Mevinolin, also known as monocalin K, is a constituent of red yeast rice and has been shown to lower elevated cholesterol levels.22 Mevinolin is chemically identical to lovastatin (brand name Mevacor), an FDA-approved drug manufactured by Merck. The FDA concluded that Cholestin was manufactured to contain concentrations of lovastatin that exceeded traditional red yeast rice products, and the product was thus more similar to a drug than any red yeast rice product available OTC.23 While Cholestin is no longer available, many red yeast rice products remain on the market with naturally occurring concentrations of lovastatin.

In the Cholestin case, the FDA’s argument hinged on the concentration of lovastatin in red yeast rice products exceeding some traditional standard. The vast majority of hemp-derived CBD oil products available today contain concentrations by weight of CBD below 5%, as compared to Epidiolex, which is ≥ 99% CBD.24 Given this precedent, it is possible, and perhaps even likely, that the FDA will restrict products that are enriched with isolated CBD but not hemp extracts that contain naturally occurring concentrations of CBD.

it is possible, and perhaps even likely, that the FDA will restrict products that are enriched with isolated CBD but not hemp extracts that contain naturally occurring concentrations of CBD.

With FDA-approval of Epidiolex, and the FDA’s public proclamation that CBD products are excluded from the statutory definition of a dietary ingredient, the future of online and over-the-counter CBD products is uncertain. The FDA has the authority to enforce the Federal Food, Drug, and Cosmetic Act (FD&C Act) against products which are enriched with CBD. It is worth noting that the FDA is a public health agency with a myriad of competing priorities and a limited enforcement budget. When considering an enforcement action, the FDA weighs multiple factors, including benefits and harms.20 To date, harms associated with hemp-derived CBD products have been largely undocumented.

In the absence of strict FDA enforcement and oversight, widespread mislabeling of CBD products exists. Independent research has confirmed that the CBD content in almost 70% of CBD products available online could be mislabeled (43% of products were underlabeled and 26% were overlabeled for actual CBD content).25 The FDA sent warning letters to 25 companies in 2015-16 for violations of FDA rule.26 The FDA has also sent cease and desist letters to companies for making drug claims about CBD products, including claims that they treat, or even cure, cancer.27

The current legal and regulatory status of CBD is both complex and evolving, particularly with regard its legal status vis-a-vis the CSA and its regulatory status under the FD&C Act. While the implications of these complexities are widespread, restrictions in clinical research, in particular, have hindered the understanding of important safety and efficacy considerations. As a result, individuals are currently using CBD products to treat medical conditions without the support of informed healthcare providers.28

Although the approval of Epidiolex has precipitated the scheduling of drug products containing CBD derived from marijuana with no more than 0.1 percent tetrahydrocannabinols, it is less clear how it will influence the FDA’s enforcement priorities relating to hemp-derived CBD products. Increased enforcement could result in decreased access.

On the other hand, passage of the 2018 Hemp Bill could liberate the supply chain and prevent enforcement by creating a de facto legal market for hemp-derived CBD products that is separate and distinct from the medical market for Epidiolex. Or, perhaps products with low concentrations of CBD will remain below FDA enforcement priorities, as in the case of red yeast rice.

Author’s Note: The terms “Marijuana” or “Marihuana” are used reluctantly in the article by the authors in an effort to more clearly delineate the two types of Cannabis (Hemp and Marijuana) throughout the text. We acknowledge and regret the historically pejorative and racially-fueled use of this term.

Dr. Jamie Corroon, ND, MPH is a licensed Naturopathic Doctor, peer-reviewed clinical researcher and industry consultant with a focus on medical Cannabis. He is the Medical Director of the Center for Medical Cannabis Education in San Diego, CA. Rod Kight, the founder and principal of Kight Law, a law firm that represents cannabis businesses in the USA and throughout the world. Kight is editor and chief writer of the Kight on Cannabis Law blog. This an updated and revised version of an article that was originally published in the journal Cannabis & Cannabinoid Research.

An Interview With Jose Hidalgo Of Knox Medical