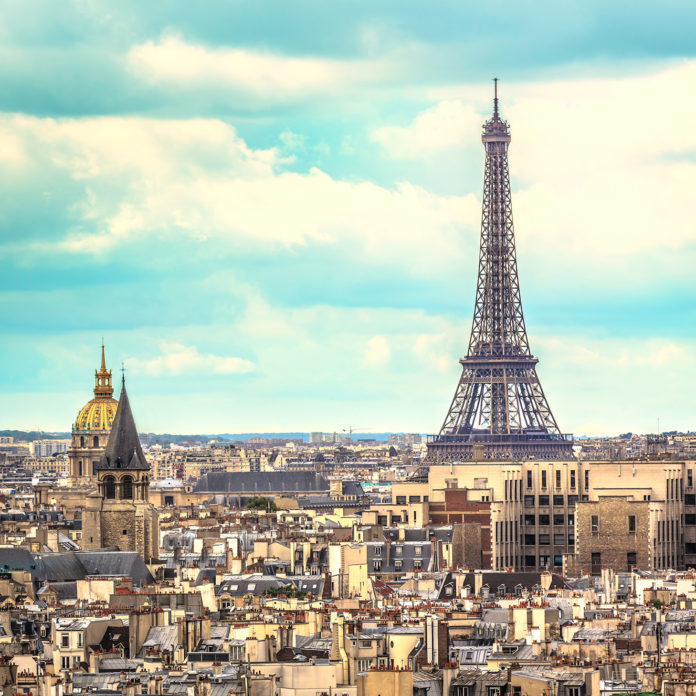 Winding through the streets of Paris, over the Seine and past bijou patisseries, the idea of ferreting out the most romantic corners of the city feels like a redundant proposition. The shabbiest garret in Paris is still in Paris, and that will put you miles beyond the rest of the world. With a view of the rooftops, a good bottle, and your darling nearby, there is scant room for improvement.

But this jewel box of a city excels at over-the-top amour, and so for your next trip, here are a handful of favorite addresses.

If you feel like a particularly good sunset might be coming on, there’s a special place in Paris to make a bee-line for with your date. I’m serious about the whole “Temple of Love” thing– that’s what it’s actually called, sometimes also referred to as the Temple Romantique, and it sits on an island in the middle of a lake in the Bois de Vincennes, the largest public park in the city.

Built by an architect in 1860, influenced by the Rococo movement, the temple has a twin in another park of Paris, the Buttes-Chaumont, except this one is much less well-known, so you won’t be sharing your romantic moment with dozens of other couples trying to do the same.

If you ever wanted to re-create that spaghetti scene in a cobblestone alleyway from Lady and the Tramp, I have your place. Keep a sharp eye out on the Rue du Faubourg Saint-Antoine or you’ll surely miss the hidden passage at number 159. Sample Fabrizio’s homemade pasta and Italian dishes such as clam linguine and melt-in-your-mouth saffron risotto, at this charming little secret of the 11th arrondissement.

When you’ve finished dinner, no need to retreat home. Head back out of the alley, down Rue du Faubourg Saint-Antoine (towards Bastille), and turn right onto Rue Charonne for an off-beat evening stroll through the local neighbourhood with charming bars (avec terrasse) for a drink.

As long as the weather is good, tango enthusiasts (advanced and never-before-danced) gather at the mini amphitheatres along the Seine in the 5th arrondissement to dance seductively until twilight. If you don’t want to join in, sitting with a bottle of wine on the steps, watching these dancers is still absolutely mesmerizing and incredibly atmospheric.

A little old man sits on the edge of the river with his radio playing tango-esque music and guarding the dancers’ belongings. Spectators watch quietly, listening to the dragging of tango feet on the stone quai. Beautiful Parisian women often turn up alone here in paisley summer dresses, waiting to be asked to dance by strangers. It’s people watching with a very sexy twist– the perfect date spot in Paris.

Here’s a nifty idea for a special day (or night) out in Paris: a charming Frenchy wearing a striped Breton shirt shows up at your hotel/ apartment to take you on an open-roof tour of Paris in his vintage convertible Citröen CV2. You can tell him to lead the way and show you all his secret spots of the city, or give him a more specific idea of the sort of off-beat things you’d like to see. All the drivers have an encyclopedic knowledge of Paris and speak several languages. This could also be the perfect activity for any parents visiting Paris with a teenage daughter– she gets to sit up front, chatting with the cute young Parisian chauffeur while Mom and Dad make eyes at each other in the back! Just a thought.

Pay a visit to Paris’ most exotic park and take a little adventure down to the foot of a waterfall to explore the impressive grotte (ps. inside the park, there’s the jovial Rosa Bonheur, the infamous watering hole of hip young Parisians for a rewarding glass bottle of house rosé). Then, just minutes from the gates of the well-known Parc des Buttes Chaumont, a quiet hilltop village hidden in the 19th arrondissement, awaits, accessible only by three staircases or a single winding road….

On top of the hill is your own private view of Montmartre across town, with a halo of sunlight perfectly centred over the Sacré Coeur. And you’ll be so taken with the view that like me, it might take you a several minutes to realise that there’s a vineyard right under your nose– one of the last of three remaining vineyards in Paris.

Since 1981, the private townhouse that once entertained the likes of Delacroix, Chopin and Rossini, has been a museum devoted to the romantic movement in the arts. But come mid afternoon, it’s simply paradise. Nestled at the top of a tree-lined lane shutting out the noise, bell flowers, lilacs and wisteria are thriving happily as if they were in the middle of the countryside.

An old glass-house next to the main townhouse that used to be commissioned by artists as a studio is now home to a lovely tea room serving lunch and the best iced tea you might ever try– Egyptian style made with hibiscus flowers and cinnamon. Paradise: found.

Why marijuana sales on the black market are blooming in Michigan...