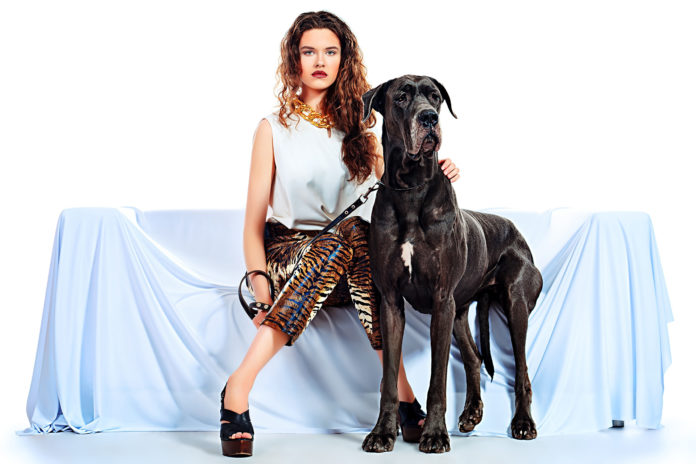 The Great Dane is an enormous breed that has been cultivated as a distinct type of dog for hundreds of years. Great Danes originated in Germany and perhaps in England, and were bred to hunt the savage European wild boar. This took a powerful, intelligent, tenacious and fearless dog, and the Great Dane’s personality and breed characteristics suited him perfectly to this task.

However, size and beauty alone were never enough to make the “Apollo of dogs” a suitable representative of his distinguished breed; he always needed height, weight, courage, nobility, speed and endurance as well. Danes are rarely used as boarhounds today, but instead have transitioned to beloved and affectionate companions and less commonly, estate guard dogs. As such, balance in temperament and physical traits is essential. According to the AKC Official Standard, a Great Dane “must be spirited, courageous, never timid; always friendly and dependable. This physical and mental combination is the characteristic which gives the Great Dane the majesty possessed by no other breed.”

While developed as a true working breed, correctly-bred Great Danes make outstanding, affectionate, loving and trusted family companions for spacious households that want a large, short-haired dog that offers some manner of protection due to their sheer size. They tend to be protective by nature only if necessary, but Great Danes should never be encouraged to be overly protective and certainly never to be aggressive. Many people are terrified of large dogs irrespective of their kind temperament. To keep these dogs as gentle ambassadors of this giant breed, Dane owners should always be vigilant and keep their dogs under complete control when in public, and securely contained when at home.

Drawings of dogs who look like Great Danes have been found on Egyptian artifacts dating back to 3000 B.C. and in Babylonian temples that were built around 2000 B.C. There’s evidence that similar dogs originated in Tibet, with written reports of such dogs appearing in Chinese literature in 1121 B.C.

The breed is thought to have been taken into various parts of the world by the Assyrians, who traded their dogs to the Greeks and Romans. The Greeks and Romans then bred these dogs with other breeds. Ancestors of the English Mastiff were probably involved in the breed development, and some folks believe that the Irish Wolfhound or Irish Greyhound also may have played a role.

Great Danes originally were called Boar Hounds, because boars were what they were bred to hunt. Their ears were cropped to prevent boar tusks from tearing them. In the 16th century, the name of the breed was changed to “English Dogges.”

Late in the 1600s, however, many German nobles began keeping the largest and most handsome of their dogs in their homes, calling them Kammerhunde (Chamber Dogs). These dogs were pampered and wore gilded collars lined with velvet. Talk about a sweet life.

The name Great Dane arose in the 1700s, when a French naturalist traveled to Denmark and saw a version of the Boar Hound who was slimmer and more like a Greyhound in appearance. He called this dog Grand Danois, which eventually became Great Danish Dog, with the more massive examples of the breed called Danish Mastiffs. The name stuck, even though Denmark did not develop the breed.

Most breed historians give credit to German breeders for refining the breed to be the well-balanced, elegant dog we love today. In 1880, breeders and judges held a meeting in Berlin and agreed that since the dogs they were breeding were distinctly different from the English Mastiff, they would give it its own name — Deutsche Dogge (German Dog).

Throughout the late 1800s, wealthy German breeders continued to refine the breed. They turned their attention to the dog’s temperament, because Great Danes had aggressive, ferocious temperaments due to the fact that they were originally bred to hunt wild boar, a particularly ferocious beast. These breeders tried to produce more gentle animals, and — luckily for us today — they succeeded.

We don’t know when the first Great Danes were brought to the U.S., or even where they came from, but the Great Dane Club of America was formed in 1889. It was the fourth breed club allowed to join the American Kennel Club.