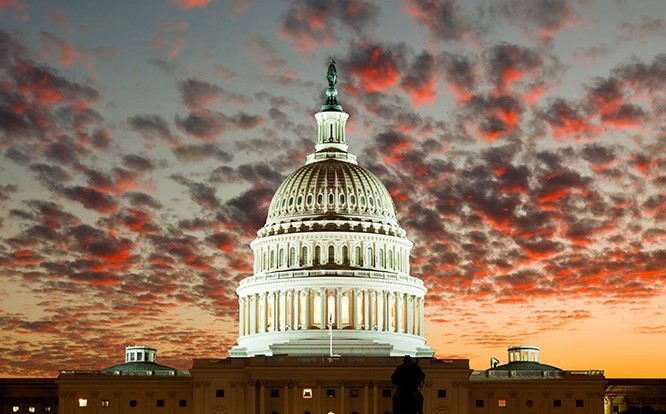 The cannabis industry investors, business owners and legalization advocates had met before to discuss the legal and regulatory headaches of operating in a world that’s licensed and regulated by states but illegal under federal law.

But what made those at Tuesday’s gathering describe it as a public relations milestone was the location: inside the Capitol complex.

Ohio Republican Rep. David Joyce, one of several members of Congress who dropped in throughout the day, said it was significant because people still have “the wrong idea” about the industry.

“They still think of it as some arcane, three guys in the woods growing marijuana,” he said. “Here you get to see that there are actually good people who have done hard work and research and are bringing cannabis forward as a medicine.”

Joyce is a co-sponsor of the STATEs Act, which would amend drug laws so marijuana provisions no longer apply to individuals acting in compliance with state or tribal laws. The bill is one of a number of measures attracting growing support in recent years as the marijuana legalization movement has become more mainstream.

With medical marijuana legal in 33 states, and 10 of them also allowing recreational use, advocates are increasing pressure on Congress to remove federal barriers that have restrained the rapidly growing industry.

“This is a place that moves glacially slow,” Joyce said. “When it comes to cannabis, I finally see some movement.”

The forum Tuesday, presented by the House Cannabis Caucus and communications firm KCSA, highlighted pressure points for the cannabis industry addressed in pending legislation, including barriers to farming, banking and medical research.

It was supposed to be held in the auditorium of the Capitol Visitor Center, but was moved at the last minute to a more nondescript meeting room downstairs because Speaker Nancy Pelosi needed the auditorium for a classified briefing on Iran.

The event coincided with the National Cannabis Industry Association’s ninth annual Lobby Days, a three-day event that was expected to attract industry leaders from around the country to Capitol Hill to meet with lawmakers and their staffs.

In one sign of progress, the SAFE banking Act, considered a key to clearing the way for banks to serve cannabis-related businesses, was approved by the House Financial Services Committee in March on a 45-15  vote.

Attendees and panelists Tuesday said they were optimistic that bills could advance further, perhaps even in the current Congress.

They pointed to the industry’s growing impact on the U.S. economy. The marijuana industry added 64,389 new jobs to the American economy in 2018, according to a report published in March by Leafly and Whitney Economics.

A Quinnipiac poll in March, for example, found 60 percent of American voters thought marijuana should be legal, compared with 33 percent who thought it should not.

Among Republicans, the split was 40 percent for legalization and 52 against. Among Democrats, 73 percent felt it should be legal and 20 percent said no.

Mara Gordon, the founder of a California medical cannabis company called Aunt Zelda’s, said she was “very excited,” about such advances. But she said that there is still too much confusion among federal lawmakers and the general public about the industry.

“We operate under the laws of our state,” she said. “We are taxpayers. And we are being penalized as though we are drug runners.”