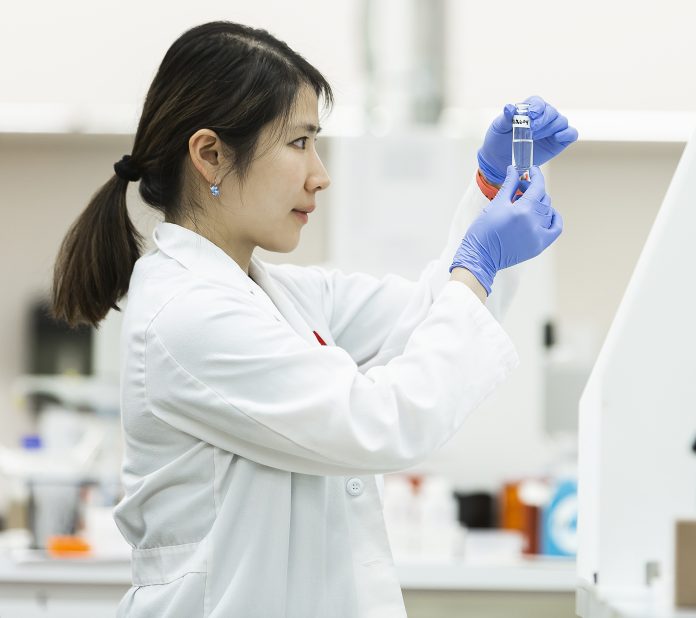 You might have heard Delta-8-THC described as “indica light” due to its calming, euphoric, and appetite-enhancing effects that pair perfectly with evening use. Derived from hemp extracts, Delta-8 delivers mildly psychoactive effects without the impairment you might get from the intoxicating Delta-9-THC. As a result, Delta-8 is increasingly popular even though it exists in a legal gray zone.

To solve the problem, our team at ACS Laboratory created a new methodology for identifying hemp-derived Delta-8-THC. We aptly named it the “It’s not Delta-9” potency test.

Delta-8-THC and Delta-9 THC are molecular neighbors with a minor chemical distinction. Surprisingly, this subtle contrast makes a huge difference in how each cannabinoid affects the body. For example, Delta-8 doesn’t bind to receptors in the brain and nervous system as strongly as Delta-9 does. As a result, Delta-8’s psychoactive effects are much less intense.

Additionally, Delta-8 exists only in trace amounts in hemp and cannabis plants. Delta-9, on the other hand, grows naturally in high concentrations. As a result, you won’t find plant-derived Delta-8 products on the market. Most hemp companies produce Delta-8 by chemically altering CBD using carbon, vitamin C derivatives, solvents, and acids.

Another point of division is that Delta-8 THC is unregulated and does not appear on the federal government’s list of controlled substances. Recently the DEA created uncertainty by saying, “all synthetically derived tetrahydrocannabinols (THC) remain scheduled I controlled substances.” But without defining what constitutes synthetic, the DEA did not directly implicate Delta-8. Moreover, Delta-8 does not appear anywhere in the USDA’s Final Rule on hemp. In fact, the USDA defines “Total THC” as the combination of Delta-9 and THCA only.

The hemp industry is forging ahead with marketing as the new and purportedly “better than CBD” compound. Now, Delta-8 companies must tackle the testing issue that could cost their reputation and their legal standing.

It bears repeating, Delta-8-THC is not Delta-9. Delta-8 is a different compound that will not get you stoned or arrested. Despite the distinction in origin and effects, laboratories can’t always tell the difference. Admittedly, we were one of those labs.

Before revising our methodology, we relied on industry-approved testing standards and chromatograms. Chromatograms graphically display cannabinoids like THC and CBD in real-time as they are separated through the testing device. Think of a chromatogram as a visual illustration of the plant or product’s compounds, also known as peaks.

In the example below, the cannabinoid peaks are spread out, and the results are clear. But that’s not always the case.

Sometimes the chromatogram’s peaks are too close together for laboratories to make the right call which is terrible news for Delta-8 companies who are looking to sell high-quality, compliant products.

We learned this lesson through direct experience. Last year, one of our Delta-8-THC clients sent a batch of gummies for potency testing. Our chemists utilized Ultra-High-Performance Liquid Chromatographs (HPLC) to separate the cannabinoids and analyze the different peaks. To our surprise, the chromatogram showed us the product tested above the legal limit of Delta-9 while barely showing a trace of Delta-8. We had a feeling the results were wrong, so we went back to the drawing board.

When we investigated further, we discovered the universally approved standard for Delta-8 detection was ripe with flaws. By following a flawed system, nearly all laboratories could be making the same mistake. Labs could easily report inflated concentrations of Delta-9, making a compliant product seem illegal. On the other hand, labs could also accidentally under-calculate Delta-9, making an illicit product seem compliant. The latter example is precisely what happened to our client, Stacey Hamilton, a Partner at Boro Hemp.

Stacey purchased Delta-8 from a manufacturer who provided laboratory results “proving” the product contained less than the legal limit of 0.3% THC. But Stacey never believes the first Certificate of Analysis (COA) she receives, so she sent the solution to our laboratory. Using our revised Delta-8 testing standards, we discovered Stacey’s Delta-8-THC contained more than 0.3% THC. Stacey had to retire the whole batch.

The universally accepted testing procedure works too fast and may not clearly separate the cannabinoids. As a result, chromatograms that report Delta-8 and Delta-9 peaks can accidentally integrate the two. When the peaks become indistinguishable, inexperienced labs will have trouble reading the results.

Our new methodology is unique because it allows our laboratory to detect cannabinoids as distinctly unique compounds. Unlike the old method, we slowed down the process of separating the cannabinoids and incorporated various controls to identify the special characteristics of Delta-8. The process is more time-consuming and complicated, but it’s well worth the investment.

As the hemp industry matures, innovators will create more and more Delta products derived from hemp. In fact, Delta-10-THC is next in line to launch. That’s why laboratories must continuously re-evaluate methods to ensure they’re staying ahead of development and providing valid results. Laboratories that fail to adapt will create the false impression that illicit products are on the rise. This can lead to a situation where regulators are skeptical of Delta products, and consumers fail to trust the information on labels. Reliable testing is the only way to promote consumer safety and industry integrity.