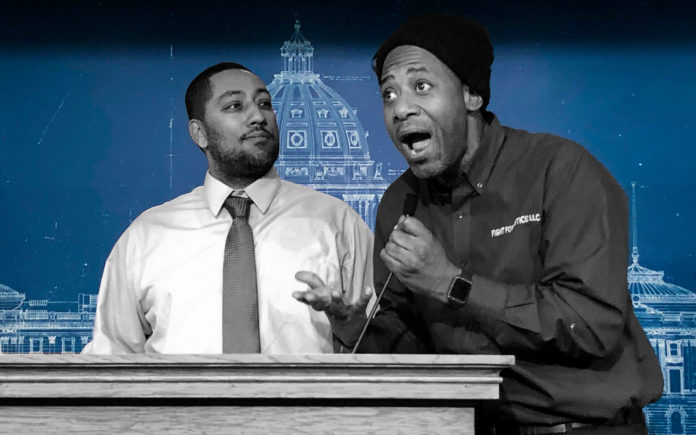 ST. PAUL, Minn. (AP) — Emotions ran high as debate kicked off at the state Capitol on Wednesday on whether Minnesota should legalize recreational marijuana, with cannabis supporters heckling opponents of legalization during a news conference that ended in a shouting match.

“The current science does not support the commercialization and normalization of recreational marijuana,” said Judson “Kim” Bemis Jr., chairman of the Minnesota affiliate of Smart Approaches to Marijuana. He said use by teens and young adults “skyrockets” when marijuana is legalized.

The case gained nationwide attention when Castile’s girlfriend livestreamed the immediate aftermath on Facebook, fueling growing protests across the country over police shootings of black men. The officer, Jeronimo Yanez, who is Latino, shot Castile, a black man, just seconds after Castile informed him he had a gun. A jury acquitted Yanez of manslaughter.

Minnesota is one of several states across the country where legislatures are considering whether to legalize recreational marijuana. New Gov. Tim Walz and new Attorney General Keith Ellison support legalization. Some lawmakers plan to introduce bills to would make Minnesota follow the lead of other states where it’s now legal. New York Gov. Andrew Cuomo unveiled a plan Tuesday to make his state the 11th. In Illinois, the discussion has shifted from “when” to “how.”

“Why is it that you’re not as angry as I am? Because it’s not affecting your community.”

House Speaker Melissa Hortman, leader of her chamber’s new Democratic majority, has said the House will discuss the issue this session but that it’s too early to know the outcome. In the Senate, which Republicans control by just two votes, Majority Leader Paul Gazelka has warned of the potential negative consequences.

Backstrom said chemical addiction and illegal drug use is “by far the largest contributor to crime in our society” and that legalizing marijuana would only aggravate the problem. Fatal crashes involving marijuana use have risen sharply in states that have legalized it, he added.

The prosecutor also said it’s a “myth” and a “lie” that America’s prisons are filled with low-level, nonviolent marijuana users. He said less than half of 1 percent of people imprisoned in Minnesota are there for marijuana use, and 70 percent of them have prior felony convictions.

“You don’t go to prison for a marijuana offense unless you’re in possession of or dealing with large quantities of this controlled substance,” Backstrom said.

Marcus Harcus, executive director of the Minnesota Campaign for Full Legalization, challenged those statements when legalization supporters held their own news conference later. He pointed to state figures showing that nearly 10,000 Minnesotans are arrested on marijuana charges every year. He said many lose their freedom, if only briefly, while others lose jobs and housing and end up with arrest records and lower-level convictions that haunt them for decades.

“You don’t have to be incarcerated long-term for this to ruin your life,” he said.

Harcus conceded that shouting down opponents might have hurt their cause, but added that it’s necessary to understand why people were so upset.

Thompson acknowledged that he had done a lot of the shouting.

“I’m sorry if I intimidate anybody, or if anybody thinks that I’m the ‘angry black man.’ My question is, ‘Why is it that you’re not as angry as I am?’” Thompson asked, then answered, “Because it’s not affecting your community.”