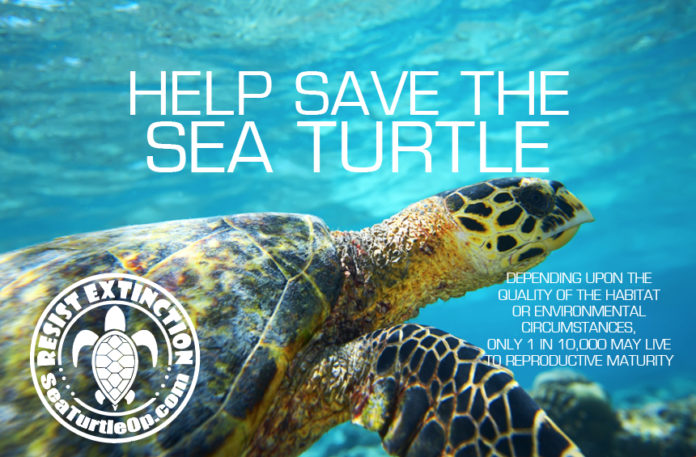 During mating season, both males and females leave their feeding grounds and migrate to the nesting beach to mate. However, only the females will come onshore to nest.

Boaters be Aware! These animals are in our near shore waters year round! Mating can take place either on the surface or under water. Females may mate with several males just prior to nesting season and store the sperm for several months. When she finally lays her eggs, they will have been fertilized by a variety of males. This behavior may help keep genetic diversity high in the population.

Most species nest at night, under the cover of darkness.  This provides them with more protection from predators.   Adult females often swim thousands of miles to nest on the same beach where they were born (within 1 to 5 miles). Most females return faithfully to the same beach each time they are ready to nest. Not only do they appear on the same beach, they often emerge within a few hundred yards of where they last nested. Sea turtles are generally slow and awkward on land, and nesting is exhausting work. While nesting the mother sea turtle appears to shed tears, however she is not really crying.  She is excreting excess salt.  Sea Turtles drink salt water and the accumulation of salt in their body would kill them if they did not secrete it this way. The Nesting Season in South East FL begins on March 1st and runs through October 31st.  Leatherbacks nest between from March to June.  Loggerheads nest between May and August and Greens nest from June to September.

After about 2 months of incubation, the eggs begin to hatch.  The temperature of the sand governs the speed at which the embryos develop as well as the sex of each hatchling. Warmer temperatures in the nest make female sea turtles and cooler temperatures make male sea turtles.   Hatchlings usually hatch from the nest at night or during a rainstorm when temperatures are cooler and there are fewer predators. Once they are all at the top of the sand, they erupt from the nest as a group. They orient themselves to the brightest horizon, and then dash toward the sea.  Unfortunately, improper artificial lighting of urban development draws tens of thousands of the tiny sea turtles away from the ocean each year.  If they don’t make it to the ocean quickly, many hatchlings will die of dehydration or be caught by predators like birds, crabs, raccoons and feral cats. Once in the water, they swim several miles off shore to the Gulf Stream. They will float in the Gulf Stream on patches of seaweed called Sargassum for 3 to 7 years (about the size of a dinner plate).

Sea level rise due to Climate change is increasing the number of nest lost to tidal inundation. This results in nests being washed away during normal seasonal high tides or nesting habitat wiped out due to catastrophic erosion events. Planting salt tolerant coastal vegetation is the only things that works to stabilize the beach and reduces erosion.HL