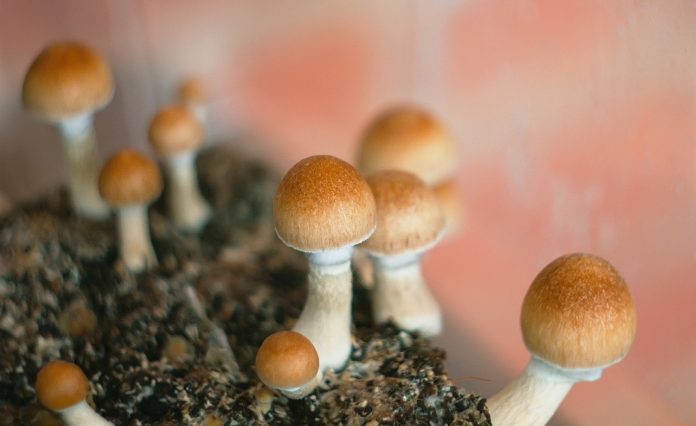 Psilocybin and the Default Mode Network?

Medicinal and hallucinogenic mushrooms have long been a part of human history, however it wasn’t until 1958 that psilocybin, the active ingredient in “magic mushrooms,” was first synthesized by Albert Hofmann in Switzerland and introduced to the western world. The history of psilocybin in this country has been subject to the changing tides of political policy, and after a brief period of promising research in psychedelic assisted therapy in the 1960’s, psilocybin was made illegal in 1971 and research halted. Luckily, the last 2 decades have shown a gradual resurgence of interest, and in 2018 Psilocybin assisted therapy received Breakthrough Therapy Designation by the FDA creating a new wave of studies particularly for Major Depressive Disorder and Treatment resistant Depression.

Psilocybin is a naturally occurring psychedelic compound found in over 200 mushroom species. It is referred to as a “pro-drug” because once ingested, it is converted in the liver to the active form called “psilocin.” This latter molecule, in turn, is what is responsible for the wide variety of effects associated with the psychedelic experience (often referred to as a “trip”), which ranges from mood enhancement to hallucinogenic visions. Psilocybin is considered a “classic” psychedelic, and therefore shares similar mind-altering characteristics with other well-known psychedelics such as LSD, DMT, and mescaline.

The interesting thing about the structure of psilocybin (and psilocin) is that it is almost identical to the molecular structure of serotonin (the “feel good” neurotransmitter). This means psilocin can bind to the serotonin receptors in our brains, particularly the 5HT2A receptors, without causing any damage to the receptor. In addition, the body is able to break psilocin down once it has completed its function.

How does Psilocybin work?

Just like the other classic psychedelics, the effects of psilocybin are due to the activating effect it has on the 5HT2A receptors. Following ingestion, perceptual changes begin after approximately 30-45min, followed by about 2-hours of peak intensity, with effects wearing off by hour 6 to 8.

Interestingly, tolerance to psilocybin only lasts a couple of days, and physical dependence is not observed. This makes it a very safe substance, and unlikely to lead to drug dependence. (However, it is important to remember that addiction depends not only on the substance, but also the intention with which the substance is used – and therefore any mind-altering medicine can create process addiction, which will be discussed in next month’s issue.)

Common physical effects include changes in heart rate (both increases and decreases), changes in blood pressure, pupil dilation, and nausea. However, the majorities of effects are subjective and can include altered perception of time, hyper arousal, disorientation, lethargy, euphoria, giddiness, paranoia, anxiety, and depression (yes, depression, the same condition it is being studied to treat!).

The reason that there is such a range of potential experiences a person can have is because, as James Fadiman, PhD describes in his book “The Psychedelic Explorer’s Guide”, the subjective experience depends on 3 important factors: the set (refers to a person’s mindset prior to taking the medicine), the setting (refers to the environment in which this plant medicine is taken), and the dose.

How is Psilocybin used?

The reemergence of research with psilocybin has created a much-needed hope for the increasingly hopeless global health crisis today. The future of psilocybin is already set to include research into its use for alcoholism with depression, depression in Alzheimer’s, for treating opioid addiction, for post traumatic stress disorder, mood symptoms of post-treatment Lyme disease, and anorexia (to name a few).

In order to truly understand the therapeutic potential of psilocybin, it is important to review some basic neuroanatomy.

What is the Default Mode Network?

Current research coming out of Imperial College London by Robin Carhart-Harris, PhD uses fMRI scans to show how different parts of the brain respond to administration of psilocybin. Of particular importance are the parts of the brain collectively referred to as the Default Mode Network (DMN). The DMN is responsible for creating order and minimizing uncertainty. It is engaged during higher-level operations such as thinking about thinking (metacognition), daydreaming, and self-reflection/introspection. When this part of the brain is overactive though, the mind becomes too rigid and this can lead to biased belief systems, which manifest as addictions, depression, anxiety, OCD, and eating disorders.

When used in the right set and setting, a person experiences a break from their “usual programming.” Meaning, while the medicine is active, a person temporarily ceases to transmit information in the brain using the DMN. Instead, the person is forced to transmit the same information using new connections as seen in the diagram below…this is not an entirely new way of thinking though… this is how we used to think as children. Without the influence of our usual self-judgment, fear of the future, or over analyzing, we are able to shift our thinking to become active participants in our lives and create the life we want to live.

Psilocybin creates, what Carhart-Harris refers to as an “entropic ‘hot state’.” Entropy is a state of disorder, which may seem like a problem, but here this state serves to relax a person’s rigid belief systems. It is an opportunity to recalibrate the rigid biased beliefs that lead a person to develop their maladaptive behaviors such as addiction and maladaptive thought patterns such as depression.

It should be made clear that psilocybin (or any other psychedelic) is not a magic bullet, but it is certainly a glimpse of hope for the people who are suffering from debilitating and currently lifelong mental health conditions. The medicine will not do for you, what you are not willing to do for yourself, but psilocybin shows promise to be the activation energy people need to create lasting positive changes in their lives.

Simple Tips For Successful Trademarking In The Cannabis Industry