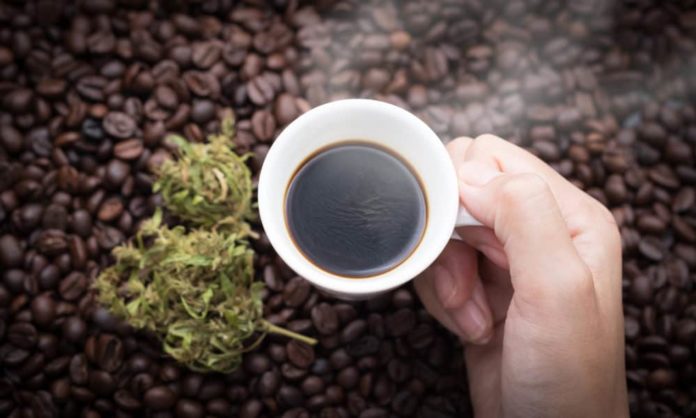 The United States’ thriving obsession with CBD-infused coffee products has resulted in another product launch, this time in the American heartland. The Roasterie, a Kansas City company, announced on Monday that it is retailing a canned cold brew with 10 milligrams of CBD.

Does this news have you abuzz? Those who are interested and located in the general vicinity of Missouri can pick up the drink at Kansas City CBD store chain American Shaman — the drink is a Roasterie-American Shaman collaboration — and the Roasterie Factory Cafe, for $5 a can, alongside the company’s pre-existing line of canned cold brews.

In November, Missouri voters approved Amendment 2, a medical marijuana initiative that will allow cannabis patients to cultivate the plant at home, and buy up to four ounces of cannabis a month. Industrial hemp products have been legal for purchase in Missouri since state legislators passed an initiative in May of 2018. Low-THC products have been legal for consumption by certain patients in the state since the passage of 2014’s HB 2238.

“That mandate from voters is directing this shift in our office,” Baker said. “This changing attitude toward marijuana is something we have been seeing anecdotally from our juries for some time.”

Fans of CBD cups of joe can already find made-to-order cups in cafes across the United States. Portland, New York City, and Milwaukee are all cities where such a delicacy may already be enjoyed.

Though undeniably popular, the CBD coffee movement has not been without its detractors. To quote High Times’ own Jeremy Glass, it’s possible that upon consuming an infused brew, “You don’t feel relaxed, you don’t feel alert, you just feel like a hunk of fat in clothing.”

Many have pointed out that the merger combines two substances with what may seem like contradictory effects, given CBD’s reputation as a relaxer.

Nonetheless, those who love drinking their cannabis have a lot to look forward to in 2019. Molson Coors and Walmart Canada are among the corporations that have indicated that cannabis beverages are on the list of products they are currently exploring. The corporations have published forecasts saying that cannabis beverages could very well comprise a large share of the marijuana retail market in the future. Given their predictions, it looks like those doubting the liquid cannabis revolution may be in for even more of a headache down the line.