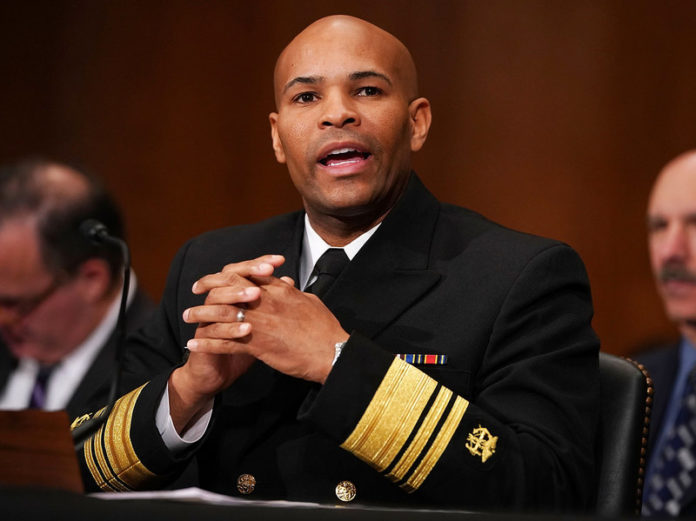 US Surgeon General Jerome Adams recently used his official Twitter account to make a startling claim: Contrary to the promises made by criminal-justice and drug-policy reform advocates, he said, the era of legal adult-use cannabis has actually led to more people of color being arrested.

DYK that in most states that have legalized adult use of marijuana, arrests of people of color have actually increased?  Social justice is important to address, but also important we evaluate actual outcomes and not assume legalization automatically = social justice.

The Feb. 23 tweet triggered immediate backlash from academics and researchers as well as cannabis-reform advocates, who pointed out a fundamental problem with what the country’s chief medical officer broadcast to his roughly 584,000 followers: It’s just not true. Not at all.

“The number of marijuana arrests decreased by 56% for Whites, 39% for Hispanics, and 51% for Blacks.”

In Colorado, marijuana-related arrests decreased by 52% between 2012, the year voters legalized recreational marijuana, and 2017, according to a much-anticipated state Department of Public Safety report released in October.

Figures from other states reflect a similar phenomenon: There are far fewer people arrested for an activity that is no longer a crime—a fact that is true across racial lines.

“The number of marijuana arrests decreased by 56% for Whites, 39% for Hispanics, and 51% for Blacks,” according to the Colorado report.

These statistics nevertheless reveal a persistent problem: Racial disparities in cannabis arrests remain. Just as before legalization, a disproportionate number of black and Latino people are arrested for marijuana crimes compared to whites—meaning legalization has solved neither racism nor racially biased policing.

Maybe that’s what Adams, who is black, actually meant?

…What?
Did you mean to say racial *disparities* in marijuana arrests have stayed the same or increased? https://t.co/VpXpZDh6JR
— Shaleen Title (@shaleentitle) February 24, 2019

Apparently not: On Feb. 26, Adams posted a follow-up tweet clarifying that he’d meant what he said. And with that, Adams went from merely mistaken to ideologically incorrect.

FYI since many (including @LeoBeletsky ) have asked.  This isn’t all of it, but is a good summary of some of the data out there, w references. pic.twitter.com/qmhco7baXO

Doubling Down on Disinformation

To support his claims, Adams, who was appointed in 2017 by President Donald Trump, tweeted slides from a presentation prepared last year by Smart Approaches to Marijuana (SAM), a Washington, DC–based advocacy group that opposes cannabis legalization.

Over the past several years, SAM has earned a reputation for opposing medical and adult-use legalization at all costs—truth and data among them.

The organization has been repeatedly accused of misrepresenting facts or cherry-picking data to paint as dire a picture of legalization as possible.

“It’s like having the Flat Earth Society joining a conversation about geography.”

In 2017, SAM agreed to pay thousands of dollars in fines for violating California campaign finance law after failing to disclose special interests who helped fund the group’s opposition to Proposition 64, which legalized adult-use cannabis in the state.

Shadowy origins aside, the data tweeted by Surgeon General Adams have also drawn fire from public health and policy experts.

As noted by Renee M. Johnson, a professor at the Johns Hopkins University Bloomberg School of Public Health, Adams’s claim about arrests rates seems to rest on an assertion made by SAM regarding arrest rates specifically of black youth. The same can’t be said with respect to all black people, nor all people of color.

In Colorado, for example, the number of black youth arrested for marijuana—which, to be clear, remains illegal for minors—increased from 205 in 2012 to 324 in 2014.

That’s an increase, yes. But even that claim falls victim to serious problem that renders the data all but worthless, except of course to foment fear and confusion on Twitter: The state data was incomplete. A footnote in the report explicitly says as much, though Adams’s tweet omitted that detail.

In Denver, where most black people in Colorado live, data painted a different picture. Police there reported that arrests of black youth plummeted by 75%.

“The data should not be reported without those caveats,” Johnson told Leafly News via email. “Nonetheless, SAM evidently passed on the slide to the Surgeon General, and it was posted on Twitter.”

“As a matter of routine, if you give data to someone impactful like a Surgeon General it should be triple checked for accuracy and complete notation,” she added.

This chart is taken from the SAM slide deck. The data are inaccurate, and I have let their organization know about the inaccuracies. pic.twitter.com/U9JdcbfDfv
— Renee M Johnson, PhD, MPH (@renee_m_johnson) February 27, 2019

On Twitter, Johnson said she felt frustrated that the surgeon general “uses data from advocacy organizations and doesn’t reach out to federally-funded researchers.”

Contacted by Leafly News, a spokesperson for the Office of the Surgeon General did not address either Adams’s misstatement nor his choice to publicize misleading data from an anti-marijuana activist group.

“The Office of the Surgeon General strives to take into account an array of stakeholder points of view and data when looking at science around health,” Kate Migliaccio-Grabill wrote in an email Thursday. “As with any topic, when there is inadequate or incomplete knowledge, public health decisions should be made on the basis of the best available evidence with a focus on a precautionary approach to prevent harm. As America’s doctor the Surgeon General is worried about unintended health and societal consequences of marijuana use in young adults and pregnant women.”

She did not immediately respond to further questions.

Not the First Time

Adams’s tacit endorsement of SAM data was only the latest in a string of tweets that contained questionable or debunked claims regarding cannabis. All of them have since been contradicted by data provided by academics and researchers.

On Feb. 21, Adams posted that “In children and young adults, Marijuana has been shown to impede brain development and reduce lifelong academic achievement.”

“Why is the surgeon general making random, misinformed statements about cannabis?” Grinspoon asked. As for having Project SAM data cited when Adams’s claim was challenged: “It’s like having the Flat Earth Society joining a conversation about geography,” he said.

Two days later, on Feb. 23, Adams (or whoever is running his account) claimed that data from the National Survey on Drug Use and Health “clearly shows underage youth increased in states that legalized marijuana, both for medical and adult use. Wr [sic] can’t ignore youth trends.”

But apparently you can ignore well-researched reports that contradict that claim. After all, Adams himself did exactly that.

Barely two months earlier, the RAND Corporation had released a report concluding the opposite had happened in Washington state. Youth cannabis use had fallen since legalization, the report found—though researchers also called for the use of better data to follow the changing trends. In Colorado, data from that same survey found that youth cannabis-use rates were either unchanged or had fallen to decade-low levels following legalization.

All of which raises the question: Why would the nation’s top public health official choose to publicize disinformation?

Whether it’s representative of an institutional bias in Washington, DC, or a warning of what’s to come from the Trump Administration, experts contacted by Leafly News couldn’t say for sure. Some called it yet another example of an “alternative”—that is, false—assertion from Team Trump.

“He has access to better statistics,” Sam Kamin, a professor of marijuana law and policy at the University of Denver, said of Adams’s tweet. “It’s like Donald Trump tweeting out what he just heard on Fox News rather than what he’s hearing from his intelligence services.”