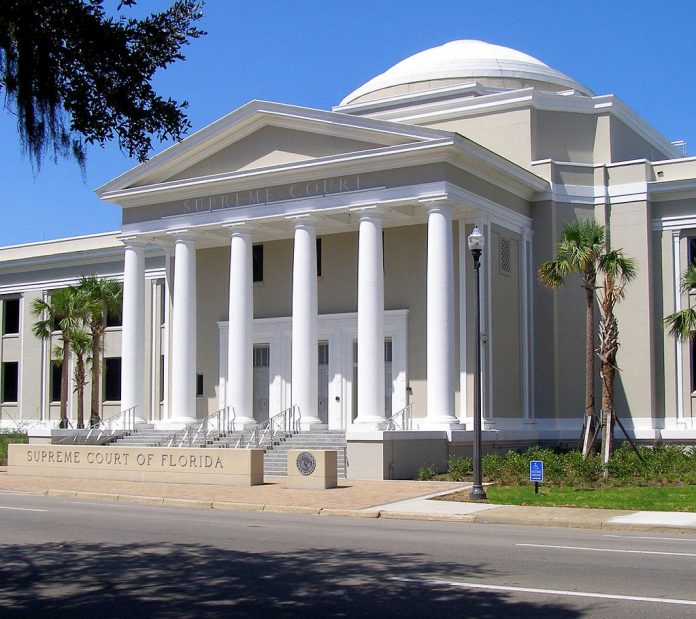 In an almost unprecedented move the Florida Supreme Court asks for more arguments before making a final ruling.

The expansion of the Florida cannabis market to conform to the constitutional amendment, Section X, Article 29, which was created by the passing of Amendment 2 in 2016, has been long it is coming. In fact, despite a rule which stated that it must be started by October 7, 2017, it hasn’t left the starting blocks.

Instead, the legislature set up a statute that is at the center of the final argument of a four argument case on the merits of a potential MMTC known as Florigrown’s case against the state and the DOH. That case, which could up-end the entire future of the cannabis industry in Florida currently rests in the hands of the Florida Supreme court, after winning their case in the 2nd district court and then the 1st District Court of appeals. You can check out the back history of the case in relation to the development and implementation of the medical cannabis program in the article in the HIGHLIFE June 2020 issue.

After winning at the district court and getting a favorable opinion in part at the 1stDCA, the governor had the case certified to go before the Florida Supreme court. The case was delayed from its original date, due to the COVID-19 pandemic, but still got an unprecedented virtual court date via Zoom on May 5th. The DOH, along with other parties siding with them, gave oral arguments from several locations before cameras.

Only one day had passed before the FSC spoke out, but it was not an opinion they rendered, but a request. They felt that the DOH had failed to respond to the fourth of four arguments laid out by Florigrown, so they made the very rare request for Supplemental briefs from the DOH in 10 days, followed by Florigrown’s answer 20 days after the DOH brief was filed.

At issue, was an argument whether Florigrown had a, “substantial likelihood of success on the merits of their challenge to section 381.986(8)(a)1, (a)2.a., and (a)3., Florida Statutes (2017), as a special law granting a privilege to a private corporation.

The state did not address that issue at all in their arguments, prompting the court to order the supplemental brief.

“As soon as practicable, but no later than August 1, 2017, the department shall license any applicant whose application was reviewed, evaluated, and scored by the department and which was denied a dispensing organization license by the department under former s. 381.986, Florida Statutes 2014; which had one or more administrative or judicial challenges pending as of January 1, 2017, or had a final ranking within one point of the highest final ranking in its region under former s. 381.986, Florida Statutes 2014; which meets the requirements of this section, and which provides documentation to the department that it has the existing infrastructure and technical and technological ability to begin cultivating marijuana within 30 days after registration as a medical marijuana treatment center.”

This created a special class of corporations that were exempt from having to do a competitive application, and it was a closed group because no new organization could go back in time to apply for those licenses, and only those entities that were granted a license, filed a lawsuit against the state for the improper application process, or lost the competition for a license because they were deemed unqualified. Per the statue, the losing entities needed only to agree to be compliant in the future of all qualifying activities.

What was an event greater indignity to those who wanted to apply for the coveted licenses, was the fact that many of the organizations that won a license by default, rather than competitive qualification, sold those licenses without so much as building a place to grow the plants, but instead sold them to the highest bidder, or continue to hold on to the inactive licenses without growing the plants to sell to the patients desperately waiting for a new, free and open regulated market. Many were sold as nothing more than a piece of paper for $50M.

The Florida Supreme Court felt it necessary to return to the case to resolve the issue of whether or not this statue was a “Special” law created in the guise of a general law, and whether it gave privilege to a private corporation. If either of these occurred, the statue would be unconstitutional.

The DOH posited that the pool of applicants was still open, because the statue allowed for an expanding group of licenses as the population of patients grew. However, by giving the licenses to a closed group of applicants from 2014 and still, as of this day, not opening the application process, this does not bear out. But the law state that the open group must have a generalized description, but the way the statute was worded, it specifically described an existing group of corporation, so clearly that they could have just listed their names instead of a description

This leads to the second question was whether the statute provided a special privilege for private corporations. Florigrown’s brief, authored with the Akerman group, stated, “The statute permits private corporations to be licensed as an MMTC without going through the extensive application process the statute imposes on other entities seeking a license. Both licensure without application and competitive advantage are “privileges” as defined by this Court.”

The DOH, in their arguments also stated that this was not a special law because it had implication for the entire state, but Florigrown retorted that was not a legitimate test.

While Florida was just starting to open back up, many entities desperately seeking a license, including the Liner Source LLC, who had also tried to register as a MMTC applicant, waited anxiously for the FSC opinion to be published. But as is typical with the story from the beginning, there was an additional surprise.

In July, the FSC issued the almost unprecedented that there be scheduled, in October, a second set of oral arguments on the special law issue, to be followed by another agonizing wait for the court to render their opinion.

So, the status quo continues. Only a fraction of the active licenses are producing product, making the market far from open and the prices high. The operating licenses, noted as “Super Licenses” because some entities operating continue to build more and more brick and mortar dispensaries without introducing competing MMTC’s, continue to be a closed market. One MMTC, MedMen, who bought Treadwell nurseries, had planned to build 25 dispensaries but only opened eight, only to end up closing all of their Florida operations after numerous fiscal and legal issues they encountered as a Multi-state operation (MSO).

Florigrown noted that they are not asking for the entire statue to be struck down. Just the ones that pertain to a special law or special privilege given to a private corporation, as well as unconstitutional caps and mandated vertical integration.

Florida’s medical program continues to wait, along with Florigrown and everyone else trying to get into one of the most lucrative potential markets in the country.