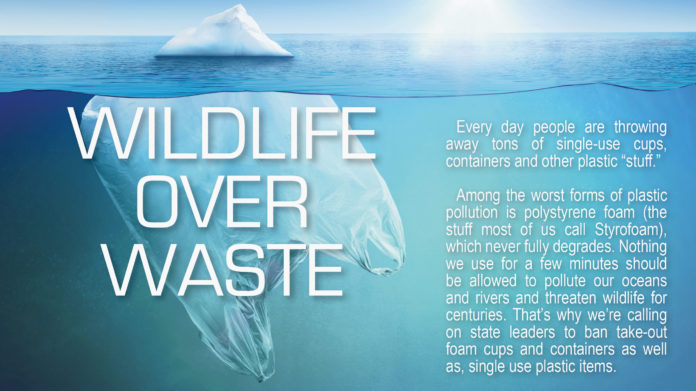 For a bird or fish or turtle, it’s easy to mistake a small piece of plastic for food—especially when there are millions of pieces of plastic floating in our rivers and ultimately our oceans.

Scientists have found plastic fragments in literally hundreds of species, including 86% of all sea turtle species, 44% of all seabird species, and 43% of all marine mammal species. Ingesting these fragments is often fatal. Animals can starve when they ingest too much plastic that they can’t digest. When animals ingest plastic waste, it can block their digestive tracts. As a result, they starve. Toxic chemicals in plastic can harm animals’ health—and people can ingest these chemicals as they make their way up the food chain.

Pollution that lasts for hundreds of years

Scientists are still documenting the scope of plastic pollution and investigating its effects. But for decades we’ve known that one of the worst forms of plastic pollution is polystyrene foam, the kind used in foam cups and take-out containers, what most of us call Styrofoam.

Polystyrene foam breaks apart easily, but it persists in the environment in tiny particles—and every bit of it ever made is still out there and could continue to threaten wildlife for hundreds of years to come.

Nothing we use for a few minutes should be allowed to pollute our rivers and oceans for hundreds of years—especially when we don’t really need it. That’s why, along with our national network, we’re calling on more than 25 states to ban take-out foam cups and containers.

Florida is at a crossroads

Of course, there are plastics companies that don’t like this idea. Single-use plastic bans in Florida are being rolled back as quickly as they are rolled out.

The town of Surfside voted to repeal its plastic ban at its Aug. 13 commission meeting. The next day, the town of Palm Beach, which passed a ban in June, moved to rescind it. Gainesville and Alachua County soon followed suit.

The municipalities aren’t changing their minds on the need to reduce plastic waste; they’re walking back policy to avoid a legal battle. They have each received letters from the Florida Retail Federation, the Republican led lobbying group representing retail giants Walmart, Target and Publix, among others, alleging the bans violate state law and threatening to sue the local governments.

The Retail Federation cites a 2008 law, or what’s known as state pre-emption, that prevents local governments from regulating recyclable materials, including “auxiliary containers, wrappings, or disposable plastic bags.” Instead, the Federation prefers “to have a comprehensive statewide discussion about this issue.

The ball has been in the state’s court for over nine years. The preemption law, passed by legislators in 2008, requested the Florida Department of Environmental Protection’s recommendations on plastic bag regulation by 2010. The department submitted its report, laying out 12 options for lawmakers to consider, from educating consumers to banning bags completely.

Yet legislators haven’t enacted any substantive laws on the matter.

For Florida’s ocean wildlife and coasts, this is an all-hands-on-deck moment. If we work together, there’s a lot that we can do to tackle these problems. It’s going to require action on all levels—from individual citizens to powerful policy makers in Tallahassee and Washington D.C. to local leaders in the cities and towns across the state.

It’s important that the elected officials who work for YOU hear from you. They need to know that you want them to be a part of the solution. We invite ALL of Florida’s elected officials and policy-makers to join us.

You can make a big difference as an individual. Start by rolling up your sleeves and getting your hands dirty. You can join or organize a neighborhood beach cleanup to pick up trash, volunteer for a sanctuary that rehabilitates injured marine wildlife, or spend time helping one of the many organizations that patrol Florida’s beaches to locate and protect sea turtle nests. And then ask your elected officials to do the same!

We know this is a phenomenal challenge – to imagine and then realize a a vibrant and thriving wildlife population. Florida beaches and waters that are clean and accessible to all, and whose ocean is thriving and providing for millions. Lets leave this world a better place for our children and grandchildren. I am up to the challenge – and I hope that you are, too.