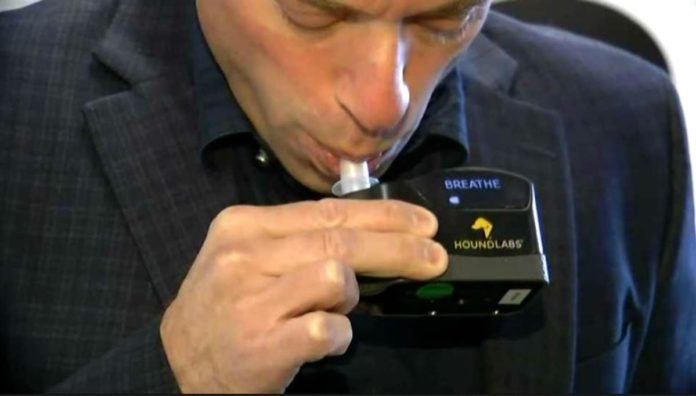 Earlier this week the Oakland-based diagnostics company Hound Labs announced that they’ve created a product that provides accurate measurements of THC in the body. The news created a minor stir. A functional cannabis breathalyzer has become a sort of technological Holy Grail for entrepreneurs eager to provide police with accurate and up-to-date roadside testing for intoxicated drivers.

‘When it’s commercially available,’ the breathalyzer maker said, ‘you can test it.’

But it’s not easy. Hound Labs’ quest to invent a device back in late 2015. Four years later, the market still awaits the first commercially available device.

Blood tests and urine tests can only measure past consumption. Saliva tests, like Canada’s police-implemented Draeger DrugTest 5000, take 24 hours for results, and have resulted in at least one sober driver having her car and license temporarily taken away.

One of the main problems: A breathalyzer cannot actually show a correlation between THC and intoxication. Even the National Highway Traffic Safety Administration has pointed out that it’s “difficult to establish a relationship between a person’s THC blood or plasma concentration and performance impairing effects.”

Yet voters continually cite THC-intoxicated drivers as an argument against legalization, raising the perceived significance of such a product.

In a trial study conducted at the University of California, San Francisco, a small group of 20 cannabis consumers—both frequent and infrequent—consumed (their own) cannabis and were tested nine times over the course of three hours. “No study for the evaluation of THC in breath has been larger to date,” remarked UCSF’s Dr. Kara Lynch.

That’s a bit of a puzzling claim, given that a sample size of 20 isn’t exactly robust.

The breathalyzer itself resembles a chunky old-school cell phone. According to the company, after a person breathes into the tube, a disposable cartridge automatically captures two breath samples, and results are available in a few minutes. Hound Labs claims that THC can be detected in the breath to an incredibly specific degree—a trillionth of a gram per liter, for up to two to three hours after inhaling cannabis. Yet such a sensitive device means that a tiny sip from a vape pen could show up as a monster dab hit, a questionable premise for testing employees or seemingly-intoxicated drivers.

Hound Labs has been the subject of much skepticism since they began conducting clinical trials in 2016. At the 2017 TechCrunch Disrupt event, Mike Lynn, the founder of Hound Labs—who is also an emergency room doctor and reserve deputy sheriff—was bluntly asked onstage: “Why are you such a narc?”

“We’re not Theranos,” Lynn joked recently, in reference to the Silicon Valley company that became infamous for its fraudulent blood testing technology.

Yet his quip hints at some of the questionable practices surrounding Hound Labs. In a recent interview with Mashable, for instance, he admitted that he hadn’t even read the results of the UCSF study. In one of the company’s “test studies” conducted two years ago and uploaded to YouTube, Hound Labs encouraged participants to get as high as they wanted, and then had them drive around a track at 65 mph. Unsurprisingly, they hit things.

In its media release earlier this week, officials with Hound Labs proclaimed that they had “created the world’s first marijuana and alcohol breathalyzer for employer and law enforcement use.” And yet that breathalyzer doesn’t seem to be available for anyone outside of a UCSF lab to actually demo. “When it’s commercially available,” Lynn told Mashable, “you can test it.”

That day may not be too far off. Plans are underway to begin manufacturing Hound Labs breathalyzers later this year. The company anticipates selling the units largely to law enforcement agencies and construction companies for an estimated $5,000 a pop.